Illustrated Maps of Honedera Village, an Estate of Chūsonji Temple

These maps do not have titles, so I shall call them together the “illustrated maps,” or just the “maps” as appropriate. When necessary, to distinguish between them I shall refer to one as the “household map” and the other as the “shrines and temples map.” The household map depicts the homes and paddies of Honedera in greater detail than the shrines and temples map because such maps were used for tax assessment purposes. The latter, though overall more simplified, supplies much greater detail on the mountains around the village, and also the paddies set aside for the valley’s religious facilities. 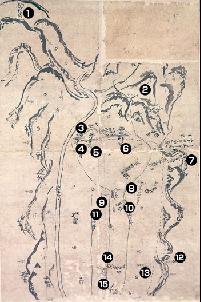 The area included in both maps corresponds to the Hondera area of modern Ichinoseki City, Iwate. (Note that the pronunciation has changed from the medieval “Honedera” to contemporary “Hondera.”) This settlement is 16km west of central Ichinoseki on National Road 342, past the famous Gembikei Gorge but along the same Iwaigawa River.

Environs of illustrated maps. The farmland of medieval Honedera was located along the Iwaigawa banks and centered on the Honderagawa riverside. The area south of the National Road was not farmed extensively. The distance between the farmed plains and Sannō no Iwaya in the illustrated maps is greatly reduced, suggesting the area was not farmed.

In the upper map, notice the string of toponyms: 本寺 (Hondera), 駒形 (Komagata),要害 (Yōgai), 沖要害 (Okiyōgai), 若神子 (Wakamiko), 下真坂 (Shimomasaka) along the north bank of the Iwaigawa River. In the midst of all this is a flat area in which the Honderagawa, a small river, runs. This is the arable flatland in the illustrated maps. Both maps are oriented with west at the top, and in both the Honderagawa is visible flowing from top right (northwest) to bottom left (southeast), though in the shrines and temples map the river is labeled檜山川 (Hiyamagawa) and is drawn with just two simple strokes.

These maps show the fusiform (spindle-shaped) valley topography stretched north-south into a rectangle. Though not an “accurate” representation, it is a clever method of picturing the entire Honedera village on rectangular paper.

Near the top of the map and a bit farther to the west is Mt. Sannōyama, location of the cave (iwaya, 岩屋 or 窟) called Sannō no Iwaya ((2)山王石屋) in the top-center of the household map. A notation for 山王 (Sannō) can be found in the shrines and temples map as well, but this is a later addition. This map is actually missing its original upper eighth or so, in which Mt. Sannōyama was originally drawn. The smaller note was added to replace that in the lost portion.

Both illustrated maps significantly compress the distance between the village plains and Mt. Sannōyama. They also both place Mt. Kurikomayama, which straddles the modern Miyagi-Iwate-Akita tri-prefectural border, at the top of the map, though in the household map it is labeled Komagata (駒形) and in the shrines and temples map Komagatane (駒形根). In fact, the distance from Hondera to the peak of Kurikomayama is 29km, so the maps’ depictions are also a distortion of the landscape. Such license was necessary to include in the maps the village’s sacred western peak, which can still be seen from virtually anywhere in the valley. This sacralization of Kurikomayama continues today, as the village’s present-day tutelary shrine is Komagata Shrine.