Depictions of a Medieval Village -2

In addition to the shapes of the houses and their paddies, the presence of two roads is striking in the household map. They are labeled the “old road” ((7)古道) and Masaka Shindō ((5)馬坂新道, or “Masaka new road”), neither of which is included in the shrines and temples map. The relative prominence of different features is suggestive of the disparate functions of each map.

In fact, a note on the rear of the household map indicates that it was created to settle a border dispute between Chūsonji Temple and the Kasai clan during the Kamakura period (1192-1333). Chūsonji had a claim to the village dating from the twelfth century, while the Kasai, vassals of the shogunate, were stewards of Iwai County. The note reads, roughly: “Honedera illustrated map for use as evidence in border dispute between Temple and County.” The same references to “Temple” and “County” can be found on either side of the north and west ridgelines, which are drawn thickly for emphasis. The temple’s property claim to the valley is substantiated with the label “temple territory” (寺領) on the inside of the ridgeline, while the outer lands are attributed to the county (郡方).

This begs the question of what relevance the household, their paddy lands, and the two roads have to this border dispute. It is important first to recognize the two types of paddy represented here. The first is ill-shapen, smaller paddies. The second is the large swatch of paddy land in the upper right, divided neatly into twelve rectangular plots. The smaller paddies are located at the foot of the northern mountains (ア), to the south of the Honderagawa (イ), and around the mountain stream source labeled (11)中澤 on the shrines and temples map (ウ). Of these, (ア) and (ウ) are both dependent on natural spring water. This is obvious in the case of the mountain stream source, but it bears note that spring-fed paddies still exist today at the northern edge of Honedera. As for the paddies along the Honderagawa, they are located south of the river because that bank is lower, making water use comparatively easier. None of these three sets of paddies would have required large-scale construction, and could surely have been created by the local farmers. The tradeoff was that most were probably swampy, meaning that their yield was probably comparatively low.

On the other hand, the large, rectangular paddy area is at a higher elevation than the river, making irrigation with its waters more difficult. To irrigate these paddies, farmers had to dam the Honderagawa upstream and dig a trench or trenches to read their fields. The payoff for this effort was that these paddies could easily be drained at the appropriate stage of the rice growing cycle, providing better growing conditions and higher yield. Add to this the fact that the paddies themselves are rectangular, and it becomes clear that this paddy land and irrigation system was the product of a well-considered and implemented plan that would have been impossible for any one farmer to carry out. So who was behind this massive public works plan?

We must also consider the nature of the two roads. The “old road” ((7)古道) follows precisely the flow of the Iwaigawa River ((3)石ハ井河 on the map, now磐井川), which formed the natural southern limit of the village. The river cuts deeply into the ground here, forming a deep valley with steep, cliff-like sides. The mountains close in, too, leaving no flat land. The old road wove through this dangerous landscape, which could easily have turned deadly with even just a little rain.

The road called Masaka Shindō ((5)馬坂新道), on the other hand, climbs up into the northern mountains, and was probably a much safer road. After all, 馬坂 means “horse slope” or “horse hill,” implying that the road was accessible to horses. Moreover, Masaka (now written真坂) remains the area’s name to this day, an indication of just how important the opening of this road was for the village.

It is my belief that this roads and the large, rectangular paddy plot were created at roughly the same time and by the same person or persons.

Near the spot where Masaka Shindō crosses the mountains in the household map, there is a building called the Taishidō ((4)大師堂). Nearby, numerous round, stone-like objects have been drawn. In the same place on the temples and shrines map is the label, Jie Mound ((12)慈恵塚). Jie (or Jie Daishi) is the posthumous name by which the Heian-period (794-1192) Tendai abbot Ryōgen is known, and the cairn—for that is what the pile of stones is—is reputed to be his grave. The cairn is extant today, as is a hall dedicated to Ryōgen farther down the mountainside, at the location of the worship hall ((13)御拝殿) in the temples and shrines map. This is an indication that Jie Daishi remains an object of veneration for the village even now. 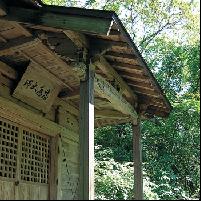 Jie Mound and worship hall at left (on Mt. Sakashibayama). Stone shrine atop cairn is a later addition. Worship hall located below; formerly filled with gravel.

The Kamakura-period collection of tales known as Senjūshō (“Buddhist Tales of Renunciation”) includes a story about the Jie Mound, indicating that it was near Hiraizumi. The great Edo-period (1603-1868) chronicler of Tohoku, Sugae Masumi, heard and recorded this story near Hiraizumi, and indicated that it was still told in Honedera.

In the Senjūshō, the story is told like this: a young woman from the Hiraizumi area wishing to learn about the Lotus Sutra is unable to find a suitable master in this remote region. However, one day, she hears a voice from the attic of her house, teaching her of the great Buddhist text. The girl become suspicious, and searches the attic. She finds that the source of her teachings is a skull with a living tongue, which informs her that it is Jie Daishi of Enryakuji Temple and begs to be buried on Mt. Sakashibayama. The girl complies, becomes a nun, and builds a small retreat where she venerates the skull.

This tale, it goes without saying, is not one of historical fact. But the tradition from which it draws goes back as far as the Kamakura period—as do the maps. And tales of a talking skull reciting the Lotus Sutra can be found in other Heian and Kamakura collections such as the Hokkegenki (“Miraculous Tales of the Lotus Sutra”) and Konjaku monogatarishū (“Collection of Tales of Times Now Past”) as testaments to the power of the sutra. In these retellings, the one to discover the talking skull is always an itinerant monk who brings the teachings of the Lotus Sutra to the people. These wandering devotees of the Lotus Sutra during the Heian and Kamakura eras were responsible for spreading Tendai Buddhism along with a faith in the sutra. These tales of talking skulls were used to convey the magnificent power of the sutra. It seems likely that this was the origins of the legend of Jie Daishi and his memorial cairn in Honedera.

I believe that it was these same itinerant monks who built Masaka Shindō and brought with them the funding, technological expertise, manpower, and organizational skills necessary to develop the new paddies. The wandering holy men called hijiri were critical to the development of Japan’s infrastructure during the medieval period, including roads, bridges, and paddies. No doubt this was the case in Honedera as well. These monks also provided the critical link between the village and Chūsonji, a Tendai temple, leading to Honedera’s transformation into Chūsonji’s estate.

The household map was created as illustrated evidence of this process. During Japan's middle ages, development was the most effective assertion of the right to stewardship. Thus, the illustrated maps are irrefutable proof that Honedera was the property of Chūsonji. 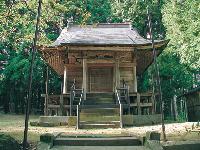 Komagata Shrine. Hondera’s tutelary shrine, with a view of the major paddy land.