For about 300 years from the late Heian period to the early Muromachi period, Honederamura Shoen Iseki, located in the Hondera region of Gembi-cho, Ichinoseki City, was administered as the domain of the Sutra Repository Steward of Chuson-ji in Hiraizumi. 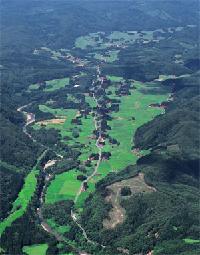 At Chuson-ji, there are two illustrated maps of Honederamura Shoen Iseki drawn in the Kamakura period, which give us a visual clue on what the estate was like in medieval times. And when you walk around the site, you can see for yourself that the landscape has barely changed since when these maps were drawn. The site is one of the few places in all of Japan where you can experience the atmosphere of a medieval estate. For this special nature, Honederamura Shoen Iseki has been designated as a national important cultural landscape, and the places that can be identified from the maps have been designated as national historic sites. With historical documents, illustrated maps, a landscape that is true to the maps, and rare sites from the estate days, a medieval farming village landscape can be found here. 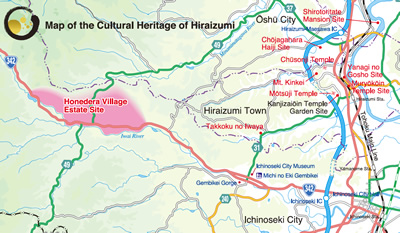 Honederamura Shoen Iseki is located in the Hondera region of Ichinoseki City. After the fall of the Oshu-Fujiwara clan, the extent of the village was determined by Minamoto no Yoritomo as bounded by Kagikake in the east, Sanno no Iwaya in the west, the Iwai River in the south, and the ridgeline from Mitakedo to Masaka in the north. Today, to protect the peripheral environment, the 761-ha area (approximately 7 km east-to-west; 2 km north-to-south) with the 14-km point on National Road 342 heading toward Mt. Kurikoma from JR Ichinoseki Station as the eastern border and Mt. Sanno at the 21-km point as the western border is designated as an important cultural landscape planning zone.
The area is a terraced plain formed by the left bank of the Iwai River which flows east from Mt. Kurikoma, and is surrounded by low mountains with altitudes of about 300 m. The plain area where farming takes place is about 150 to 180 m in altitude, gently sloping from the west to the east; the Iwai River flows about 20 km further below, dividing the plain area from the ridgeline. In the medieval illustrated maps, the area is depicted as surrounded by mountains and rivers; the same scenery can still be seen today in an aerial photograph.
There are rice paddies throughout the Hondera region, with three major water sources: the natural spring water from the northern and western mountains; the Hondera River which flows eastward in the plain area into the Iwai River; and the Sagarimatsu irrigation channel, built in the modern era, which draws water from the Iwai River. A unique feature of the houses in the area is igune, a windbreak planted on the west side to provide shelter from the wind blowing down from Mt. Kurikoma.
The area has escaped major development and hence kept its rural landscape since medieval times, with traditional structures and features such as igune. 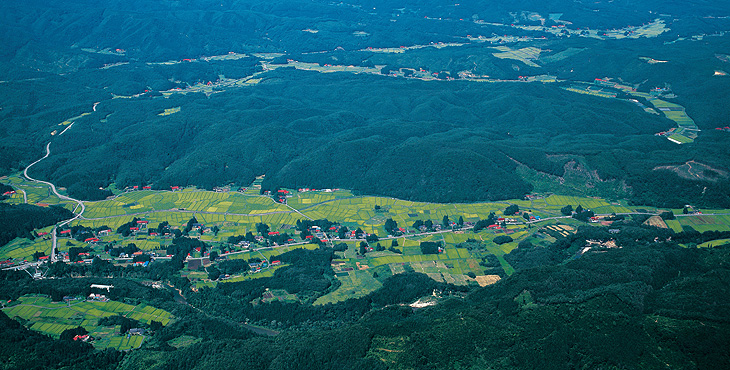