Depictions of a Medieval Village -3

The Religious World of the Village

As Honedera came under the protection of Chūsonji, Tendai faith penetrated the village. As the development process is illustrated in the household map, Honedera’s religious transformation is made clear by the shrines and temples map. The specific purpose of this map, unlike the household map, is unclear. Theories abound: some hold that the shrines and temples map, too, was created to settle a border dispute, while others argue that it was made to clear up an argument arising from a temple land survey. Though there is no agreement on this issue, we do know that the paddies exempted from taxation but alternatively made to foot the bill for festivals, rituals, and the like, are drawn in great detail. Using this fact as a starting point, we can begin to unravel the mystery of the village’s religious world.

Let us first examine the religious sites along the road. In the shrines and temples map, a single road is centered, running from bottom (east) to top (west). Not only does this road form the central axis of the map, but the village’s major religious facilities are pictured along it. Both of these facts points to the exceptional importance of the road to this map.

At the entrance of the village stands a single tree ((15)). While the characters here cannot be deciphered, the corresponding area of the household map is labeled Kagikake (鎰懸(6)). ついで「若神子神田二段(14)」という文字が神社の図像とともに描かれている。This refers to the Wakamiko Shrine. Unane Shrine ((9)宇那根社) is also pictured, as (further left, along the curve of the road) are Hakusan (Shrine) ((3)白山), Terasaki ((4)寺崎), Honedera Temple Site ((5)骨寺跡), and Rokusho no Miya ((6)六所宮). “Terasaki,” a toponym still in use today, literally means “in front of the temple,” referring to the Honedera Temple. The presence of so many shrines and temples confirms that this was the primary interest of the map.

The road ends around here, but along the same sight line, at the far western end of the northern mountains stands Mt. Kinpusen ((7)金峯山), with a shrine deriving its provenance from the famous Kinpusen Shrine in Yoshino, Nara. The rather lengthy note here indicates that it was a distance of five to six li from the shrine to Sannō no Iwaya, suggesting that there was a path connecting the two.

The portion of the map which must have included Sannō no Iwaya has now been lost, but it can be inferred that the cave would have been featured prominently at the top-center of the map, along the central axis of the map—in other words, at the peak of the village’s religious hierarchy of religious structures, and with Mt. Kurikomayama (駒形根, “Komagatane”) behind it.

Sannō (“the Mountain King”) refers to the tutelary deity of Enryakuji Temple on Mt. Hiei, Hie Sannō Shrine (日吉山王社). Sannō was also enshrined as the tutelary god of all Enryakuji’s land holdings, and the activities of the Hie Shrine’s devotees created and sustained an important network supporting the temple. Like Enryakuji, Chūsonji is a Tendai temple, so it comes as no surprise that Sannō was enshrined here at Honedera. The Hakusan Shrine in Honedera was a subsidiary branch temple of Enryakuji’s subsidiary Hakusan Shrine in Kaga. In the Hokuriku area along the Japan Sea, worshippers of Sannō and Hakusan were united as one, and Hie and Hakusan were considered the great protectors of the east during the Heian period.

The Unane Shrine was dedicated to a water god, and served as the center of the village’s agricultural endeavors. Kagikake was quite different altogether. Kagikake was a single, free-standing tree (often zelkova or the like) at the border between arable, livable land and the mountains. It was a common folk custom particularly in northern Tohoku to throw sticks into the branches of the kagikake tree as a form of fortune-telling. This custom is recorded in both illustration and text by Sugae Masumi (q.v.) among others.

The layout of the Wakamiko Shrine, Honedera Temple Site, and Sannō no Iwaya is worthy of our attention. “Wakamiko” means something like “young shamaness” or “young medium,” and formerly referred to women who invoked the spirits of the departed and transmitted their voices to the living. Honedera Temple was known as an ossuary, which were relatively common around both Hokuriku and Tohoku. Ossuaries served as the gateway to the other world, so it is not hard to imagine a connection between the young mediums and the bones of the dead; it is no coincidence that these sites line up.

Additionally, iwaya (caves) were often used as ossuaries as well. This is the case as famous sites like Yamagata prefecture’s Risshakuji Temple (popularly known as Yamadera), where multiple naturally eroded caves were used as ossuaries. We can assume the same of Sannō no Iwaya, but remains were probably entombed in the cave only after the temple was abandoned or destroyed. Tendai Buddhism, with which such bone repositories are associated, would have entered this area in opposition to or after the weakening of other Buddhist faiths, so it is most probable that the shift of the village ossuary from Honedera Temple to Sannō no Iwaya came with the Tendai-ification of Honedera.

A shrine to Kinpusen can also be found in Hiraizumi, where it serves as the city’s western tutelary. Kinpusen is associated with mountain asceticism in Japan and the deity (avatar) Zaō Gongen. As mountain asceticism is also tightly connected with Tendai Buddhism, there can be little doubt that the deity was brought to Honedera with the advance of Tendai, and in such a way as to incorporate or at least harmonize with the pre-existing faith in Mt. Kurikomayama (Komagatane). With this in mind, the single line connecting these sites—and even Kagikake, Unane Shrine, and Wakamiyako Shrine—springs into relief with Sannō no Iwaya in the most prominent, the most powerful position. Along with the new physical infrastructure of roads and paddies came Tendai Buddhism. Along with Tendai faith came Sannō, Zaō, and other mountain deities. These were interwoven with pre-existing faiths to produce a novel religious structure. And this entire process is visually captured in the shrines and temples map.

Wakamiko Shrine. Small shrine in a copse among paddies was roadside during middle ages.

The village of Honedera/Hondera magnificently preserves its medieval form. Visitors can easily compare the surrounding landscape with the illustrated maps and confirm this for themselves; many do. This is quite a moving experience, and one that I myself have had several times. I believe that we must continue to preserve Honedera’s landscape, and it is for this reason that I fervently hope the entire village becomes a National Historic Site.

Such a designation would not only protect this precious heritage but also provide a great boost to the villagers’ pride. In fact, many of the village residents are deeply interested in the depiction of their little valley in these two medieval maps, and are looking for a chance to vitalize and strengthen their community through this connection. They are erecting signage for visitors and trying to make Hondera more convenient for tourists, but as in many villages the farms are struggling to find successors who will continue to till the land. Many worry that agriculture will completely desert Hondera. To prevent such a disaster, agricultural land use in Hondera is about to undergo a massive revision.

But these measures do not necessarily agree with the goal of preserving Hondera’s landscape. This troubles me, and troubles the people of Hondera. But I think the situation is not hopeless. Land use policy is being considered with the goal of protecting the landscape as much as possible, and I am confident the villagers of Hondera will make a wise choice. Their choice may well be a signpost for the future of farming in Japan. 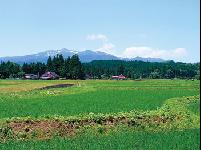